Gita Jayanti - Saturday- 3rd Dec 2022- we will be reading every Bhagavad Gita verse! 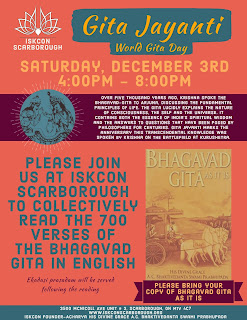 One of the Vrata(vow) undertaken during Ekadasi is to read the Holy scriptures.

What can be more glorious on this Moksada Ekadasi than reading Bhagavad Gita on the very day that marks the 5159th appearance day anniversary.

We at ISKCON Scarborough will be celebrating Gita Jayanti in a grand manner on Saturday-3rd Dec 2022 by reading all the 700 English verses starting at 4.00 PM sharp!

Posted by ISKCON Scarborough at 5:21 PM No comments:

Please accept my humble obiesances. All glories to Srila Prabhupad.

The devotees of Iskcon Scarborough are planning to have Kirtan, japa session etc for the health and speedy recovery of our dear Mother Dwaraka who was admitted to hospital on Sunday Oct 09th. Please,  let's all get together on Wednesday October 12 at 6:30pm at the temple  - iskcon Scarborough - to show our love and support but most of all to pray for mataji's full recovery.

Devotees who would like to bring prasadam are welcome to do so.

Posted by ISKCON Scarborough at 7:47 PM No comments:


Posted by ISKCON Scarborough at 10:03 PM No comments:


Posted by ISKCON Scarborough at 10:01 PM No comments:

We invite you, your family and your friends to join us in these wonderful celebrations on Friday and Saturday.

Programs for Saturday –Srila Prabhupada’s appearance day celebrations will be from 6 pm to 9 pm:

The auspicious day of the appearance of Lord Krishna is celebrated all over the world as Sri Krishna Janmastami. It is celebrated on the eighth day of the Krishna Paksha (waning moon) of the month of Shraavan. Krishna, who is the Supreme Personality of Godhead, appeared in Mathura as son of Vasudeva and Devaki.

“As stated in the Bhagavad-gita, the Lord says that His appearance, birth, and activities, are all transcendental, and one who understands them factually becomes immediately eligible to be transferred to the spiritual world. “ –Chapter 3: Birth of Lord Krishna, Krishna Book by His Divine Grace A.C. Bhaktivedanta Swami Prabhupada.

Lord Krishna Himself in Bhagavad gita, Chapter 4 text 8 describes the reason of His appearance as follows:

" To deliver the pious and to annihilate the miscreants, as well as to re-establish the principles of religion, I Myself appear, millennium after millennium."

Vyasa-puja means “worship of Vyasa,” Vyasa being the compiler of the Vedic scriptures and thus the original spiritual master.

Devotees honor Srila Prabhupada - our Param Guru on the spiritual master’s appearance day (a respectful term for “birthday”) because he authentically transmits the teachings of Vyasa.

Although ISKCON has many spiritual masters, or acaryas, Srila Prabhupada, the founder-Acharya, holds a permanent position of special esteem. So just as when he was physically present (1965 through 1977), each year devotees gather on his appearance day to praise him and recall his glories.

Posted by ISKCON Scarborough at 11:56 AM No comments:

This grand event is free for everyone and includes a diverse assortment of multicultural activities for the entire family. The focus of this year is to make the stage programs newcomer friendly.

There will be several stage performances as well as tents in the park where attendees can get their face painted beautifully, apply henna to their hands/palms and there will also be several cookbooks & ancient Vedic texts.

The highlight of the event is the distribution of free vegetarian feast/free water for everyone throughout the day starting at 11 am.

Several dignitaries will be taking part in this annual event.

The parade starts inside the Milliken Park at 11 am and the VIP introduction/ inauguration is scheduled to take place at 12 noon.

We kindly request you to spread the message about this event so that everyone can come to Milliken Park on Aug 13th 2022 to partake the blessings of the Lordship.

"Picture verses, or Amazing verses" - The Citra-Kavitvani is a collection of 12 amazing verses written by Srila Rupa Goswami. These verses, full of transcendental tongue twisters and playful picture poetry, highlight Rupa Goswami’s genius as a foremost poet among the Gaudiya Vaisnavas.

Link to join the class:

A disciple of Srila Prabhupada, Dravida dasa joined ISKCON in 1973 and has served as an editor and proof-reader for the Bhaktivedanta Book Trust for over 45 years. From 1983 to 1989 he was part of the team that completed Srila Prabhupada’s magnum opus: a commentated English translation of India's jewel of Vedic wisdom, the 18,000-verse Srimad Bhagavatam (Bhagavata Purana). He also helped produce the revised editions of Srila Prabhupada’s Isopanisad, Krsna Book, Caitanya-Caritamrta, and Teachings of Lord Caitanya, and he is part of the team that produces Srila Prabhupada’s Vyasa-puja book every year. In addition to his editing work, he teaches Bhakti Yoga classes at ISKCON’s San Diego temple and other centres in North America.

Throughout all this immersion in transcendental literature, Dravida Dasa developed a love of the Sanskrit language, and especially the elaborate verses of the Bhagavatam and other works of bhakti literature.

His devotion and expertise in chanting form a marvellous combination. He has a been Brahmacari throughout his devotional career.

Posted by ISKCON Scarborough at 9:28 AM No comments:

Gaura Purnima Celebrations: All are welcome to visit the temple -COVID protocols will be followed:

March 17th 2022(Thursday): The temple will be open during the following hours:

From Mar 20th, 2022 (Sunday), the temple will be opening the doors every Sunday from 10.30 am onwards until 1 pm. The regular programs like in-person classes will start from Mar 20th 2022 onwards.

Devotees are required to follow all the mandatory COVID protocols when they visit the temple.

We will be constantly monitoring the evolving COVID protocols and make changes as required.

Posted by ISKCON Scarborough at 2:49 PM No comments:


Posted by ISKCON Scarborough at 7:30 PM No comments:


Posted by ISKCON Scarborough at 7:29 PM No comments:

For comments, suggestions and feedback, please send us an email to iskconscarborough@hotmail.com scarboroughiskcon@gmail.com