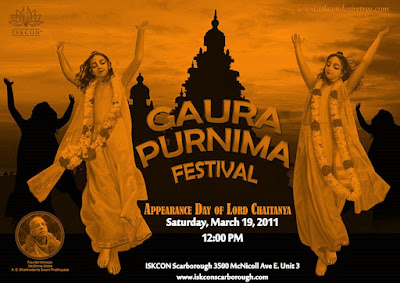 We would like to invite you to join us for Gaura Purnima celebration this Saturday, March 19, 2011 from 12:00PM onwards!

The festival will feature an abhisheka (bathing ceremony of Sri Sri Gaura Nitai), class on appearance of Lord Chaitanya as well as an Arati and prasadam feast!
Posted by Vijay Teli at 3:42 PM