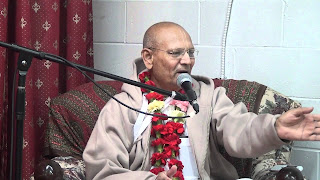 His Grace Kratu Prabhu - a disciple of His Divine Grace A . C . Bhaktivedanta Swami Prabhupada will be gracing us with his presence coming Friday - 3rd June 2016.
Program starts at 6.45 pm sharp!

Prabhu will also be taking part in a live radio program on Saturday - 4th June 2016 at the Geethavaani radio station from 10 am to 11 am.

Srimad Bhagavatam 4.30.34
Even a moment's association with a pure devotee cannot be compared to being transferred to heavenly planets or even merging into the Brahman effulgence in complete liberation. For living entities who are destined to give up the body and die, association with pure devotees is the highest benediction.

While in West, he worked as professional engineer for five years in Toronto In Chicago he worked for Chicago temple as director of congregational preaching. He then become temple President of Vancouver temple in 1987. In 1993, he moved to Baroda, Gujarat and conducted college and school preaching. He also started a book distribution program by Bullock Cart for every town and village. In 1997, he became temple President of ISKCON, Delhi and continued house and pandal preaching programs.


In 2002, he became an initiating Spiritual Master in ISKCON and is ever since vigorously travelling and preaching all over the world.

Posted by ISKCON Scarborough at 10:23 PM