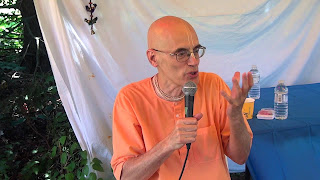 We are pleased to announce that HG Dravida das will be visiting our temple to give a class coming Sunday.

Dravida Prabhu joined the International Society for Krishna Consciousness at the age of 25 in early 1973 at the temple in Brooklyn, New York. A child of the Sixties, he'd already been exploring yoga, Vedanta, meditation, and alternative lifestyles for some time. But once he read Srila Prabhupada's "Teachings of Lord Caitanya," he knew that bhakti-yoga was the path for him. The Brooklyn temple happened to be the location of the Bhaktivedanta Book Trust, the publishing arm of ISKCON.


He has edited Back to Godhead magazine and other books published by the Bhaktivedanta Book Trust for over 25 years. From 1983 to 1989 he was part of the team that produced the last six 1,000-page volumes of the magnum opus of His Divine Grace A. C. Bhaktivedanta Swami Prabhupada: a commentated English translation of India's jewel of Vedic wisdom, the 18,000-verse Srimad-Bhagavatam (Bhagavata Purana). He also helped produce the revised version of Srila Prabhupada’s nine-volume Caitanya-Caritamrita during 1995-96 and his Krishna book from 1994-95. In addition to his editing work, he teaches Bhakti Yoga classes at the San Diego ISKCON center. Throughout all this immersion in transcendental literature, Dravida dasa developed a love of the Sanskrit language, and especially the elaborate Sanskrit prosody of the Bhagavatam, portions of the Caitanya-caritamrita, and other bhakti literature. His devotion and expertise in chanting form a marvelous combination.


He currently resides at the New Govardhan temple in San Diego, offering regular Bhagavad Gita and Bhagavatam classes as well as leadership for the bhakta program there. His engaging multimedia presentations at Japa retreats and elsewhere are highlights of devotional gatherings.