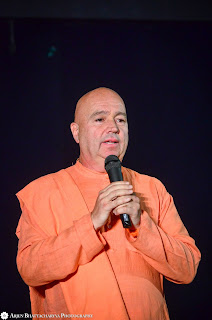 The program starts at 10.30 am with the Tulasi arti & Guru Puja followed by a class by Maharaj at 11 am. Sumptuous prasadam (sanctified food) will be served at 12.30 pm.

Born in 1952 in Chatham, Ontario, Canada, Bhaktimarga Swami (formerly John Peter Vis) adopted the monastic lifestyle of the Hare Krishna order in 1973. Globally known for his “Canwalk” marathons, he achieved the remarkable feat of walking across the entire length of Canada from the west to east coast in 1996 which was detailed in the National Film Board of Canada’s documentary, “The Longest Road”. Bhaktimarga Swami repeated the feat again in 2003 (this time from east to west), and yet again a third time (west to east) in 2007.


The Walking Monk completed his FOURTH trek across Canada in the summer of 2014 (Canwalk 4) which began in the spring of 2012. With this "friend-raiser", he is once again promoted pilgrimage and a more car-free, care-free lifestyle. In addition to Canada he has also walked across the countries of Ireland, Israel, Fiji Islands, Mauritius, Trinidad and Guyana.


In addition to marathon walking and administrative duties, Bhaktimarga Swami is an instructor of Bhakti Yoga (devotion to the Divine) and mantra meditation. He is also a playwright, producer and director of live avant garde “morality theatre”, whose captivating works based on tales from ancient India are performed regularly across the globe. In his productions, The Walking Monk regularly engages youth from the global communities he visits in this “enter-lightenment” designed to uplift the spirit.


A warm invitation goes out to you and your family to join us on this day to associate with this senior disciple of Srila Prabhupada.