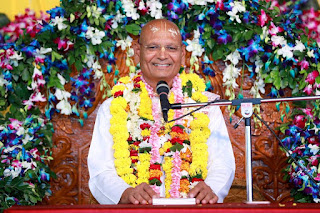 
His Grace Kratu Prabhu - a disciple of His Divine Grace A . C . Bhaktivedanta Swami Prabhupada will be gracing us with his presence tomorrow- 17th Nov 2017.

Even a moment's association with a pure devotee cannot be compared to being transferred to heavenly planets or even merging into the Brahman effulgence in complete liberation. For living entities who are destined to give up the body and die, association with pure devotees is the highest benediction.

Kratu Prabhu was born in aristocratic Gujarati Gaudiya Vasihnava family on July 5, 1944. His father was an ardent vaishnava and his mother persistently chanted 16 rounds of Hare Krishna maha-mantra. His wife Her Grace Amrita Devi Dasi is also initiated disciple of Srila Prabhupada.


While in West, he worked as professional engineer for five years in Toronto In Chicago he worked for Chicago temple as director of congregational preaching. He then become temple President of Vancouver temple in 1987. In 1993, he moved to Baroda, Gujarat and conducted college and school preaching. He also started a book distribution program by Bullock Cart for every town and village. In 1997, he became temple President of ISKCON, Delhi and continued house and pandal preaching programs.


In 2002, he became an initiating Spiritual Master in ISKCON and is ever since vigorously travelling and preaching all over the world.

A warm invitation goes out to you and your family to join us tomorrow.