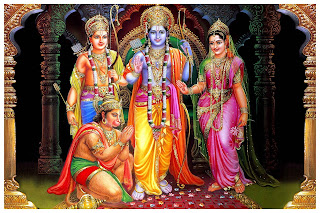 The appearance day of Lord Ramacandra (also known as Rama Navami) falls on Friday 15th April 2016. Devotees of the Lord fast until sunset on this day.

We at ISKCON Scarborough will be celebrating Ram Navami in a grand manner coming Friday. Program starts at 6.45 pm sharp with Tulasi arti.

A special Ram Navami lecture will be given by HG Rohinipriya das prabhu.
A free vegetarian Ekadasi feast will be served after our program.

Rama Navami is the appearance day of Lord Rama. Navami means nine, Lord Rama appeared on the ninth day of the bright half of the month of Chaitra. His name was Ramacandra, Prince of Ayodha.

Lord Ramacandra appeared in the Sun Dynasty, as the son of King Dasharatha, in the line of King Ikshvaku, the first ruler of Earth. Lord Rama was the darling of His father and mother, Queen Kaushalya, as well as the hero of all Ayodhya, the capital of what was then a single world kingdom.

Rama had all the admirable qualities of leadership, even from earliest youth. He possessed all physical strength, beauty, religious wisdom, fame for prowess with weapons, royal wealth, and complete renunciation.


Inseparable from Rama was Lakshmana, His younger brother. Together, the two brothers appeared on Earth to vanquish the almost invincible King Ravana and his host of Rakshasa warriors.

Here is a letter Srila Prabhupada wrote in 1968 describing how one should celebrate Ram Navami:

“So far the Advent Day of Lord Ramacandra, it should be celebrated as Lord Caitanya's Birthday was done. Fasting up to evening, and then take prasadam, and chant Hare Krishna whole day, and be engaged in reading and chanting off and on, chant for some time, then read for some time, then again have Kirtana and so on, throughout the day. If you have not got a Ramayana, then you can read Bhagavad-gita or Srimad-Bhagavatam that is all right”.

HG Rohini Priya Das prabhu graduated as a doctor of Medicine from Mumbai university but decided to dedicate his life in the service of Lord Krishna.

Prabhu, is a senior Brahmachari at ISKCON's Sri Radha Gopinath mandir at Chowpatty,Mumbai,India.

He is currently serving as the Vice President at ISKCON Chowpatty in Mumbai.

For the last 25 years he has not only been practising Krishna Consciousness but has been actively distributing the message of Bhagavad Gita to thousands of Engineering , Medical students and other professionals all over India.

We welcome you, your family and friends to ISKCON Scarborough coming Friday