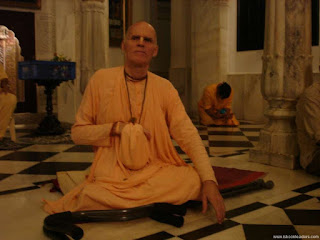 We are very pleased to inform you that HH Bhakti Raghava Swami will be giving a class at ISKCON Scarborough coming Friday- 16th Dec 2016. The program starts at 6.45 pm.

We welcome you and your family to ISKCON Scarborough this Friday to get the association of Maharaj.

Born to French-Canadian Roman-Catholic parents in the Province of Ontario, His Holiness Bhakti Raghava Swami Maharaja spent seven years of his undergraduate studies in a seminary before completing his Bachelor of Arts degree at the University of Ottawa in 1968, majoring in philosophy and social psychology. After serving as a Social Worker and Counselor from 1968 to 1971, he joined the Hare Krsna Movement in 1974 and was initiated the same year as Raghava Pandit Das.


From 1974 to 1976 he served at the ISKCON Ottawa temple. From 1976 to 1992, Maharaja lived in India, pioneering the New Bhakta Program and the Nama Hatta village preaching program from Sri Dham Mayapur and the Bhaktivedanta Youth Services (BYS) from ISKCON Calcutta. He accepted the order of sannyasa on Gaura Purnima of 1985. From 1993 to 2000, he served as Co-GBC for ISKCON Canada and as the Temple President for ISKCON Montreal.

In the year 2006 Maharaja became involved with preaching activities and community development in Cambodia where he established an NGO called the “Global Varnasrama Educational Social Cultural Organization” (GLOVESCO) and is spearheading a rural community called “Yasodapura Asrama”.


That same year Maharaja was able to return to India after a long absence of 13 years and spearheaded a rural project in South India called Sahyadri Sri Krishna Balarama Ksetra (SSKBK) from where courses on Varnasrama College were introduced. He was instrumental in establishing the national Varnasrama Development committee for India in the year 2007 and in November 2009 was appointed as National Minister for the Daiva Varnasrama Ministry – Promoting Rural Development in India.

Maharaja has concentrated his preaching mostly in Asian countries such as India, Indonesia and Cambodia. He travels extensively and holds seminars promoting the varnasrama mission. He has authored several books such a “Make Vrindavana Village” and “Varnasrama Education”.